Find the best electric guitar for you

Since its inception in 1931, the electric guitar has evolved into an instrument that is loved and played around the world. At Kauffmann’s Guitar Store we strive to help you discover the best electric guitar for YOU. We believe that this is not only based on specific specs or hardware, but also the feeling it gives you when you look at it, pick it up, and play it. 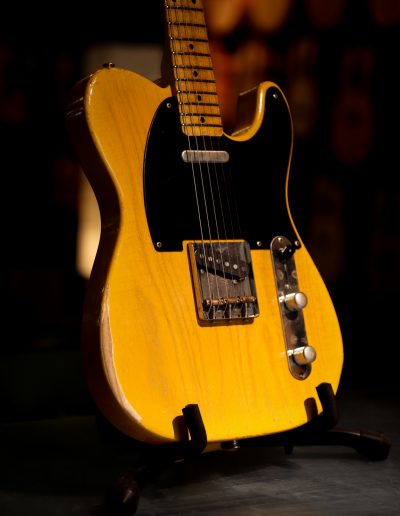 Following its invention in 1931, this new generation of guitars exponentially grew in popularity during the 1950s and 1960s, a time period also known as the golden age of rock ‘n’ roll. The reason for the creation of the electric version of the guitar was in part due to the fact that orchestras were continuously increasing in size, meaning that guitars had to be amplified in order to compete with large brass sections. The first electric guitars, predominantly used in the jazz scene, were hollow archtop acoustic guitar bodies, modified by adding electromagnetic transducers. Shortly after its invention - one year to be exact - the electric guitar became commercially available and slowly started to accumulate a crowd of early adopters and enthusiasts, until its use and popularity hit critical mass which was responsible for the electric guitar boom during the 50s and 60s.

Some of the first manufacturers included Rickenbacker (1932), Dobro (1933), National, and Gibson and Epiphone (1935). Following these early adopter brands, many others joined the industry and continue to evolve the art of electric guitar manufacturing to this day. For this reason the electric guitar has become a major contributor to the development of rock ‘n’ roll, jazz, and many other genres of music.


The best electric guitar for beginners

You have just decided to start learning how to play the guitar. Nice! But in order to get started you will undoubtedly need an instrument. You might not know too much about guitars yet, but one thing you do know is that you want it to be electric. Selecting the best electric guitar for beginners is not an easy task, as there are hundreds of great brands, and thousands of electric guitars out there.

One thing that is important to consider when choosing the best electric guitar for beginners is that it is easy to play and that it stays in tune. Then there is, of course, the way the guitar looks (cosmetics, body style, electronics) and the way it sounds. We believe that looks and sound matter because when you genuinely love your guitar you are more likely to pick it up and play it. And we all know that becoming a great guitar player comes down to putting in the hours and playing a lot. If you are not sure which look you like, we suggest you check and see what electric guitars your favourite musicians play.